I really can't remember how I heard about the Mackinac Island Swim, which only started in 2020, so this was the third annual. Somehow, I found it online last December, registered late because the date could have conflicted with a Lawler family event, sat on the waitlist with 35+ people ahead of me for months, then suddenly got in off the waitlist in mid-June (36 hours to decide; what the heck, let's do it!)
So, I didn't have enough time to train but still thought it looked like fun, and it was amazing. Very tough, 65 degree water and we had heavy winds from the east, which is unusual as that's the leeward side of the island, so that meant the water was rougher on the last 4 miles than on the first 4, and as the event director said by email the day after, it was "a washing machine" out there. UPDATE: The website describes 2022 conditions as "62 - 65 degrees, SE winds = fast and calm start with a slow and brutal finish (think washing machine)." So I wasn't imaging it.
It's not a timed event, you have a chip only so they can make sure that everyone who went into the water got out of the water. I am very happy with my 6 hours and 2 minutes of swim time for 8.2 miles. Mackinac Island is beautiful (once you get out of the most touristy area near the ferry docks), the people were great, Lake Huron is very clear and shallow for most of the coastline, and the weather was amazing for a guy from Phoenix ("Hey, this is what we condition air to.") It was, to use a cliché, epic.
More pictures later, I hope. [UPDATE: Photos were here, password is MacSwim24, but last time I tried the link, it didn't work.] A fun day and now I've swum 8.2 miles in open water (that's 3 times the IM distance, plus an extra mile). 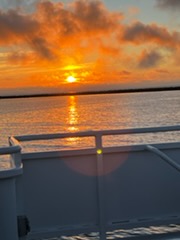 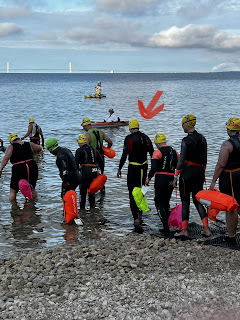 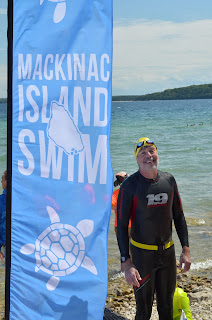 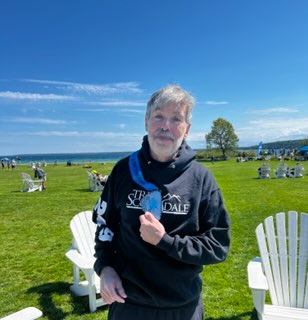 Posted by Sam at 1:19 PM No comments:
Email ThisBlogThis!Share to TwitterShare to FacebookShare to Pinterest 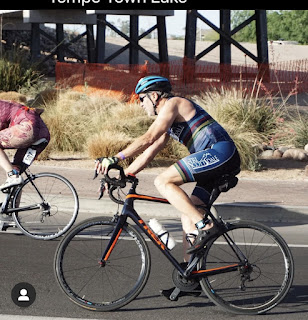 I thought I might do well this year, given the base fitness left over from IMAZ in November plus some good rest ahead of the race. I even thought maybe I could get close to 3:00 for the Olympic distance again. But the week before the race, I saw that there were 10 men (!) registered in the 65-69 age group, and my friend Jeff said that if I'd been racing 3:10 or 3:15, dropping 10 minutes in an Olympic is a very tall order, and he was too nice to say it, but I figured out I was unlikely to do it.

And when I got to the race, I did fine in the swim and was happy with my bike time, but my transitions were slow, and once I started running, I realized that my 3:00 days are long gone, and I am now at the point where 3:10 is a really good day, and I wasn't going to get to 3:10 today.

But I was determined to see it through, and I finished in 3:19. I got some water and then hung out at the Tri Scottsdale tent, satisfied with the effort but figuring that with 9 other guys racing, I was in the back of the pack, figuring that I finished well below the median.

To my surprise, it was a podium finish - third in my age group, and I actually had to beat out 3 guys to get it. I had no idea; they don't post finishes anymore, you scan a QR code at the finish and check your results on the website, but my phone was back in transition. I learned I got third when I was congratulating another Tri Scottsdale athlete on her third-place finish, and she told me I did as well. (Of course, she's about 30 years younger and finished about 20 minutes sooner.) 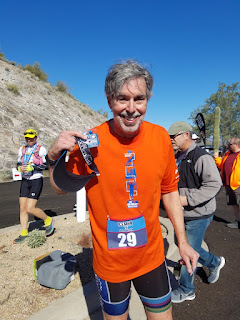 We had some unseasonably cold weather during the second half of February, so the Iceman Triathlon at Lake Pleasant, which is never warm, was about the coldest water I'd ever (and hopefully will ever) swim in, unless I'm on a boat that sinks. It was a challenging day and my time for the swim was almost 8 minutes slower than in 2020, so even though I didn't get a flat tire this year, I still finished 4 minutes behind my prior time. But I'm chalking that up to water temperature, and if my problem at a tri is the swim, I know I can do better next time. I still managed about the same percentile as 2020, so there's that.

Plus, it truly was a race where 100% of the podium was showing up at the finish line. First in my age group! Of course, I'll never tell how many were in my age group, but you can check the results here. 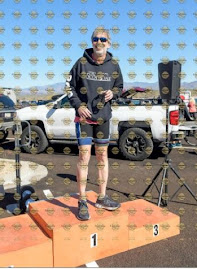 Posted by Sam at 2:53 PM No comments:
Email ThisBlogThis!Share to TwitterShare to FacebookShare to Pinterest 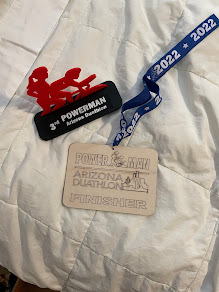 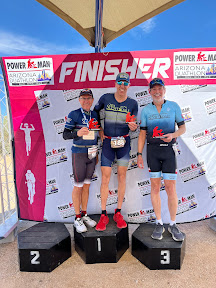 This is the race where in 2019, I fell on the second run and broke my finger (but still finished, and 3rd in my age group - of 3, of course). I signed up again in 2020, but had to cancel due to illness, and they didn't hold the event in 2021, so this was my memory-replacement race, where I redo a perfectly enjoyable experience but with bad memories removed.

This used to be a very popular event but numbers were really low this year. The setup was pretty low-key, the numbers were low enough that the park restrooms were more than adequate. I also appreciated, if that's the word, the plastic finisher medal that can double as a coaster and the cheesy plastic podium award (see above). Still, it was an almost perfect day, except for a pretty stiff wind heading uphill on the bike leg. It wasn't too cold at the start, and not too hot at the end.

The interesting thing is that my age group, in the "short" distance (5K run, 40K bike, 5K run) was one of the most competitive. The winner of 65-59 finished 4th overall. There were 4 of us (out of 26 total, including both men and women), spread out with each competitor finishing at least 20 minutes ahead of the guy ahead. So I got third in my age group, but this time, I actually had to finish ahead of the fourth guy.

I pretty much used everything I got, and I finished 9 minutes behind my 2019 time, when I ran the last 0.6 miles with a broken finger. Everything took longer, both on the runs and on the bike. You can chalk up some of the bike to the wind, but that doesn't excuse the runs or the transitions. Moving up into a new age group isn't the great deal I was hoping. Sure, people drop out, but you've gotten older and the other people remaining apparently were on the 1972 US Olympic team.

We have to get used to the new race results system; there are no computers or postings anymore, you instead use your phone to see how you did on athlinks.com.