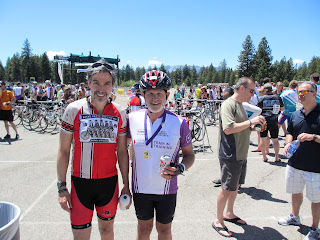 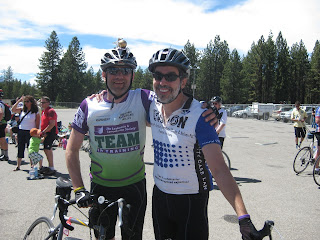 For the past 5 years (n1), I’ve ridden in the somewhat (n2) self-importantly named America’s Most Beautiful Bike Ride (AMBBR) around Lake Tahoe.  It’s a great century ride—well supported, the Lake Tahoe region is incredibly beautiful, the route is a circle around the lake and you finish where you started with no long boring bus ride back to your car, and the last 20 miles are the prettiest of the ride and, most importantly, almost entirely downhill.

Each year, I’ve done the ride as a mere participant, but each year I have hung around with Leukemia & Lymphoma Society Team in Training groups, both from Phoenix and from Westchester-Hudson Valley, New York.  I’ve been a TnT lurker, but never a participant, even though I probably should have.  I’ve got two people in my life with blood cancers, my law partner Andy Gordon and my step-brother (n3) Andy Fredman.  Both are in remission; both have ridden AMBBR multiple times; and both are huge LLS fundraisers and machers (n4).  This year is Andy Fredman’s 10th consecutive AMBBR, and Andy Gordon is now on the board of directors of LLS here in Phoenix, so I signed up to be a Lymphomaniac, Andy F.’s national fundraising team (n5).

If you could treat and cure blood cancers through pep rallies and almost cult-like behavior, TnT would have the diseases licked.  However, actual medical research requires actual financial support, which is where you come in.  This email list usually involves a political event, but today I’m asking for a charitable contribution to help those with blood cancers like leukemia, lymphoma, and myeloma.  I know from both Andys how treatments they got simply didn’t exist a couple of years ago, and if either cancer recurs, we’ve got to have something new to throw at it.  So please, contribute. Go to my fundraising page here.  As you’d expect, LLS takes all the usual charge cards (even Discover).  If you want to write a check for some reason, let me know (or just mail it to me at the office address, email me for it).

It’s not that big a deal to do AMBBR; I’ve never been bothered much by the altitude, and the ride itself is actually at lot of fun; if you’re a cyclist, you should consider doing it.  For me, however, the real challenge will be to raise at least $3,600 to help cure blood cancers.  Thanks for considering a contribution, and please consider violating my own rule about never giving in response to a mere email because, first, the contribution is tax-deductible, and second, if you don’t give now, then I will call you.

Thanks—and let me know if you have any questions.

1: Definitely 5 years—that’s how many long-sleeve t-shirts from past AMBBRs that I have, I just counted.  Especially as there are maybe 6 days a year when a long-sleeve t-shirt is comfortable in Phoenix.
2: Somewhat?
3: Actually, my deceased father’s second wife’s divorced third husband’s son. In my world, that’s family.
4: “Big deals” for you non-Yiddish speakers.
5: You should have seen the team names that were rejected, OK?
Posted by Sam at 5:56 PM No comments:
Email ThisBlogThis!Share to TwitterShare to FacebookShare to Pinterest 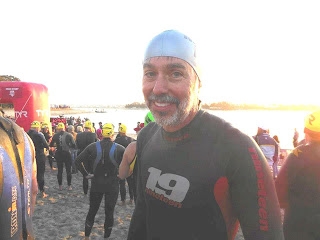 A very nice course--a salt water swim in Mission Bay, a 2-loop bicycle course around the bay and Fiesta Island, and a 2-loop run along Mission Bay and beach, with lots of people in beach houses watching and encouraging the runners (plus we got to watch the beach volleyball players).  The bicycle course came with an elevation chart--which looked troublesome until you looked at the scale, which went from sea level to 50 feet, a roadway overpass.  Not a fast time amid a very fast, very capable field of age-groupers, but given that my foot was in a cast 5 weeks ago, I was delighted to finish the run in 1:02 (after a 7 minute T2 to make sure my lace-up shoes were secure and tight).  And Tri-Scottsdale placed second in the Class 2 national club competition ("We are the runners-up-to the champions, my friends").  3:07:35, overall 747/902, age group 33/36.  Plus photos and video here (be warned, when you click on the link, the video starts playing immediately).
Posted by Sam at 2:52 PM No comments:
Email ThisBlogThis!Share to TwitterShare to FacebookShare to Pinterest 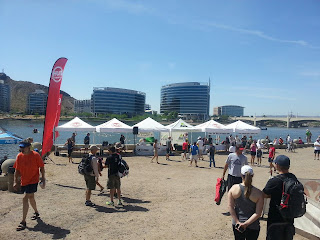 The AOWS Spring 2013 series kicked off at Tempe Town Lake on Sunday, April 7.  The 4500 meter distance (2.79 mi) was 6 laps around the course.  By the fifth lap, I had figured out where the buoys were located.  I had hoped to finish in under 2 hours (20 min/lap) but actually did 1:28:46--very steady 14-15 minute laps. Finished 10th male masters, 27/43 overall.  Really, really nice day in the water.  All results here.
Posted by Sam at 4:37 PM No comments:
Email ThisBlogThis!Share to TwitterShare to FacebookShare to Pinterest
Newer Posts Older Posts Home
Subscribe to: Posts (Atom)