What with all of the to-do over the Arizona Cardinals making the Super Bowl -- to the point where we know the family history of substitutes on the punt coverage team -- one salient fact seems absent from the discussion. The team wouldn't be in the game but for raising taxes in 2001, at the beginning of a recession. No new taxes, no stadium, no home record, no home field advantage, nada. All from raising taxes! Who knew such a thing was possible?

I strongly opposed the stadium tax in 2000 as I feared living in a state which would find spanking new revenue sources for fun and games but which would cut education, health care, and services for the disabled. People said I was too pessimistic. No, I was just early.

Posted by Sam at 11:57 AM No comments:
Email ThisBlogThis!Share to TwitterShare to FacebookShare to Pinterest

I couldn't watch. I spent the morning holding my breath until the Inauguration concluded, fearing that somehow Dick Cheney would find a way to scuttle our hopes yet again.

A long, long, long post by Marc Cooper on the limitations of the New Times version of journalism, to the extent that it's journalism. Yes, it's long but it's worth reading. (H/t Ezra Klein). Thanks to the miracle of corporate ownership, you can now read the same "turgid, under-reported and tendentious piece placed in the paper by none other than the guy who now effectively owns it" in both LA (as "Los Angeles News") as well as Phoenix.

There's an argument to be had over whether Gov. Napolitano did as much as she could for Arizona. See, for example, Jon Talton. Even though I'm probably way more liberal than the Gov (on second thought, I don't think it's ideological--I'm way more confrontational than the Gov), I don't agree, but it's an argument worth having on the terms Talton sets out. But Lacey? To paraphrase the British sitcom title, "Never mind the quality--feel the length!"

You Geezers Get Off My Lawn!


On a slow news Monday, the Arizona Republic reaches for the obvious. (But not too obvious for over 8 pages of commenters, so maybe they know their audience well.)
Posted by Sam at 9:09 PM No comments:
Email ThisBlogThis!Share to TwitterShare to FacebookShare to Pinterest
Worrying About Bias Is Biased!

I'm a bit late to this particular rodeo, but I've watched with amusement the "concern" that the new Arizona political reporting website, The Arizona Guardian, needs to be watched (we should wait and see if the cliche "wait and see" becomes overused) for signs of bias because my law firm helped form the LLC and because Democratic political consultant Bob Grossfeld is a minority owner. Here's the AZ Guardian's take, but I wonder about why only Democrats get put on probation when becoming journalists.

Funny, I don't recall similar hand-wringing when those fun-loving libertarians of Freedom Communications bought the Tribune newspapers, or when Bonneville purchased KTAR radio, or when Belo bought KTVK-Channel 3. Nobody seemed concerned about waiting and seeing if those more conservative owners would start to skew coverage in line with their political beliefs.

It reminded me of a story that former Phoenix City Council member Joy Carter used to tell. Once Mayor Margaret Hance, a staunch Republican, took Joy aside and said that it wasn't right and proper that Joy was involved in the Maricopa County Democratic Party's Nucleus Club. The Phoenix Council was, and still is, elected on a non-partisan basis, and Hance said Joy, instead of being a high-profile member of something as overtly political as Nucleus, rather should spend her time on community activities -- like Trunk and Tusk.

(For the irony-impaired or the recently-arrived, Trunk and Tusk was the GOP's version of Nucleus at the time.)
Posted by Sam at 11:32 AM No comments:
Email ThisBlogThis!Share to TwitterShare to FacebookShare to Pinterest

Sometimes It's Nice Not To Be Noticed

One interesting sidelight of the Bernard Madoff financial scandals, at least here in Arizona, is the lack of any gossip about local investors or institutions who have lost money invested with him. I've heard nothing, and I spend a lot of time talking with some of the biggest gossips in the Phoenix Jewish community. (Cue faux outrage: I resemble that remark, sir!) We're perfectly capable of developing our own financial houses of cards, but apparently none of our machers achieved the level of status that allowed them the privilege of putting their money in the leading national Jewish Ponzi scheme.

In other words, in the American Jewish community hierarchy, in the contest of who you know (and is there any other game?), we in Phoenix rank behind Latin America.

Posted by Sam at 8:51 AM No comments:
Email ThisBlogThis!Share to TwitterShare to FacebookShare to Pinterest 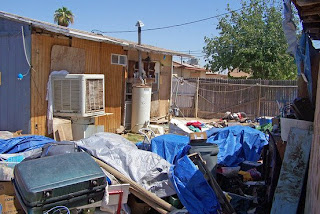 Sure, it may have been nuts for the state, national, and world economy, but why would anybody in the long chain of fees have any personal incentive to pass on this deal? The risks would get passed down the chain; the fees stayed with you. So they didn't. They would have been fired if they had, because somebody else would have made the deal instead.
So much for the "self-regulating market."
Posted by Sam at 2:26 PM No comments:
Email ThisBlogThis!Share to TwitterShare to FacebookShare to Pinterest
Newer Posts Older Posts Home
Subscribe to: Posts (Atom)