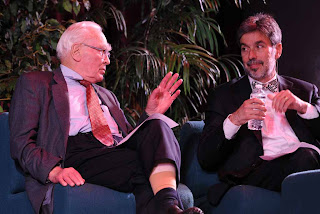 Once again, with former Rep. Orval Hansen (R-ID).  At our last session, a student at Orange Coast College didn't have a question, he just thought that Rep. Hansen looked like Warren Buffett.  They both could be members of the U.S. Olympic Eyebrow Team.  And once again, my tie is from Dogwood Ties, specialty skinny ties for the young and the not-willing-to-admit-their-age.

We visited all 3 colleges within the District: Orange Coast, Golden West, and Coastline.  It was Orval's third visit to Coast.  Here's the District's press release about our visit.
Posted by Sam at 1:33 PM
Email ThisBlogThis!Share to TwitterShare to FacebookShare to Pinterest

Mr. Coppersmith, I understand that your email messages on behalf on Ms. Sinema are mere fundraising rhetoric, but nonetheless you should note that the Navy SEALs came from Afghanistan.

"When two Black Hawk helicopters carrying the commandos left Bagram Air Base in Afghanistan, stopping in Jalalabad before crossing over into Pakistan on their way to Abbottabad, the operation invited its first risk."

Certainly true, as is the fact that the operation did not require invading and occupying Pakistan.

And, most importantly for this debate, OBL wasn't in Iraq, nor was any base in Iraq anywhere near or useful to the operation.