It's The Andy Thomas Show!
Here’s my take on the Andrew Thomas-Dennis Wilenchik-New Times imbroglio. Of course, it’s a pop culture take. The "To Tell The Truth" screen shot has Chris Lemmon as the panelist, but I just couldn’t write Tom Poston out of my script.

Maricopa County Attorney Andrew Thomas isn’t running a prosecutor’s office. Being a fair and impartial prosecutor is just too boring. Instead, he’s doing something flashier: Developing a TV game show, an updated version of "To Tell The Truth." 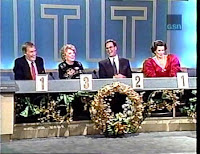 I’m Garry Moore, your host. Panel, our first contestant is special assistant Maricopa County Attorney Barnett Lotstein, a top aide to Thomas, who with fellow Republican Sheriff Joe Arpaio, is investigating Attorney General Terry Goddard, a Democrat.
The theory of their investigation is that Goddard went too easy in his office’s investigation of former state Treasurer David Petersen, a Republican. Petersen agreed to plead guilty and resign from office for failing to report outside income; apparently, say Thomas and Arpaio, Petersen was far corrupt than that, but Goddard pulled his punches because the AG’s office got reimbursed by the Treasurer’s office from proceeds of an AG fraud investigation settlement -- as required by state law.

So, Tom Poston, want to put any of your personal reputation on the line that there’s absolutely no way Andrew Thomas or Joe Arpaio would use their offices for political ends and investigate a political opponent without good reason? (Pause.) I didn’t think so. One down.

Here’s our second contestant, "independent prosecutor" Dennis Wilenchik. He’s Andrew Thomas’s former boss, and since Thomas’s election, has received well over a million dollars in fees from the county for all sorts of different legal work, none of which his office was known to handle before getting the county contracts.

Wilenchik had Carol Turoff, a friend of the judge assigned to Wilenchik’s case, whose husband is one of Thomas’s top aides, to try to set up an off-the-record, only-one-side-present meeting with the judge. (Why do all these people who hate government either work for the government, or get fat government contracts?)

What would Wilenchik want to talk about with the judge hearing his case? In court, he said he only wanted to talk about "global" matters, and later said that he wanted to be an intermediary to help "heal the rift" between the County Attorney’s office and the Superior Court.

Peggy Cass, do you believe Wilenchik when he says he wanted to sue judges and simultaneously serve as an neutral mediator getting everybody to sing Kumbaya? (Pause.) That’s two down. Over to you, Kitty Carlisle.

It’s Wilenchik again, who says he did not order the arrest of two newspaper executives who published his breathtaking grand jury affidavit, the one seeking records of every single visitor to the newspaper’s website since 2004. Wilenchik says someone in his 11-lawyer office probably ordered the arrests, not him, but he has no idea who.

Think Wilenchik is telling the truth? (Pause.) Three down.

Our final contestant is Andrew Thomas himself. Thomas hired Wilenchik to prosecute New Times because Thomas thought his antagonism with the newspaper meant he had a conflict -- until Thomas gets a lot of bad publicity, at which point the conflict disappears and Thomas personally steps in to close the investigation. Thomas has a very convenient definition of a conflict, which lets him hire a buddy, but then fire him when that’s politically expedient, and which of course doesn’t impair his ability to harass his former political opponent Terry Goddard, against whom he ran for AG in 2002.

I don’t think even Orson Bean could swallow that one.

So that’s our show for tonight. It’s always a good time with County Attorney Andrew Thomas, who with his buddies, are great contestants for "To Tell The Truth." Because they don’t.
Posted by Sam at 5:28 PM
Email ThisBlogThis!Share to TwitterShare to FacebookShare to Pinterest