The editor went with my suggestion for the headline; wonder if any of the GOP legislative leadership knows what the obscure literary reference means? 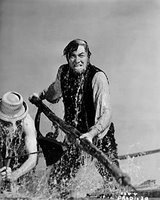 Remember all those legislators who used to rail against “government by initiative”? Turns out that they now have to put their hopes on “campaigning by initiative” instead.

That’s what the GOP Legislature has been reduced to -- putting multiple bizarre initiatives on the November ballot in a desperate attempt that maybe one of about a dozen just might gin up the base. Because, heaven knows, there’s nothing that the Legislature has done that will get anybody excited.

The Republicans have big problems in fighting Gov. Janet Napolitano’s re-election bid. The governor just signed a state budget that funds her top priorities (including funding for teacher raises, for all-day kindergarten, and for science and innovation initiatives) as well as replenishes the rainy day funds and accounts tapped during the last recession. The new budget also happens to contain the largest tax cut in state history.

Some GOP types will complain that Napolitano shouldn’t get credit for the tax cut, because she had other ideas (rebates rather than permanent cuts, property and business taxes rather than income taxes) and initially proposed a smaller cut than she approved in the final budget deal. Some voters in November actually may remember this soon-to-be-ancient history, but the number is probably going to be about as miniscule as the number who recalled that President Bush vigorously fought creation of the Department of Homeland Security right up to the last minute, when he became for it after he had been against it.

Most people never remembered that Bush opposed forming DHS until it looked like a done deal, at which point he jumped in front of the parade and gladly took credit for the whole thing. And he even got to beat Democrats over the head (and accuse them of failing to fight terrorism in a dispute over, of all things, what types of employment protections workers should have) with the department that he fought creating until he caved and took the credit instead.

Well, Napolitano now gets her own chance to lead a parade just as voters first start watching, to Republicans’ incredible frustration. She signed the new budget last month, calling it a “good ultimately balanced package” and a “fair compromise.” That’s hardly overly effusive rhetoric -- but she signed it, so she gets to take the credit.

There are few things in politics more enjoyable than being governor during a real estate boom. And the really nice thing about being governor is that your one voice, even if mild, carries a lot farther than the cacophony of 90 legislators. Just watch the Republicans fume as Napolitano gets credit for the largest tax cut in state history, probably while standing in an all-day kindergarten class, with a teacher who just got a raise, explaining to the kids how investing in bioscience and technology will help position Arizona’s economy for the future. The woman surely knows how to multi-task.

With taxes, and fiscal responsibility, and initiatives like all-day K now firmly in the governor’s corner, the Republicans are reduced to hoping their base will come out to vote to make English the state’s official language, or to prevent local governments from enacting so-called “sanctuary” policies,

or to prevent illegal aliens from being able to recover punitive damages in lawsuits. Now there’s something that people have been talking about for years, an issue that has galvanized public opinion, our incredibly fierce national obsession over undocumented migrants recovering punitive damages. Modern conservatism finally has its rallying cry, I guess.

In a year when California Gov. Schwarzenegger went 0-for-5 in high-profile initiatives -- and in California, you had a celebrity governor trying to work around an unpopular legislature -- what are the chances that an unpopular legislature can use initiatives to trump a popular governor? Certainly not any better than Ahnuld’s were.
Posted by Sam at 8:41 AM
Email ThisBlogThis!Share to TwitterShare to FacebookShare to Pinterest