A One-Lobed Barbell, Not a Donut

This is the long-promised "there shouldn't be a plague on both houses--only one has gotten extreme" column. After writing the column, I realized that I needed to specify for my literal-minded readers (and editor) what is the correct metaphor if a donut is wrong, and came up with a barbell--with only one dumbbell.

In Arizona, the current Democratic legislative leadership (Sen. Linda Aguirre and Rep. Phil Lopes, who is Arizona's third most famous bow-tie wearing politician) are more conservative than back in the days of Bruce Babbitt, when it was Sen. Alfredo Gutierrez and Rep. Art Hamilton. 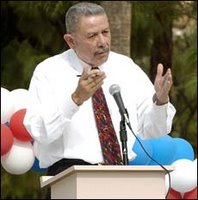 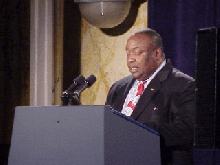 And nationally, what's extreme on the left needs a microscope or a megaphone (usually provided by the right) to be seen or heard, but what's extreme on the right is pretty much all there is and gets a seat at the table every week on Meet The Press. But I ran out of time for visual metaphors, and that was before Republicans decided their shiny new toy was to accuse The New York Times (but not The Washington Post or The Wall Street Journal) of treason.

Don’t give me that blame-both-parties nonsense. Right now, in Arizona and in DC, it’s the Republicans running the show and setting the rules -- and their two top rules are first, don’t let any Democrats have any say, and second, the most important thing is playing politics.

So despite the headline-writing artistry of the Tribune’s current (and thus absolutely best ever!) editorial page editor, politics today isn’t like a donut. The center may not exist anymore, but it’s not because everybody drifted away uniformly. Instead, one side -- the Republicans -- decided to go ever farther to the right. Democrats actually have shifted toward what used to be the center, but the GOP (and the media) moved so far that the center disappeared.

There’s apparently some sort of black hole quality that forces even public-office-holding Republicans to go even more extreme. This shift creates a real problem for those who love the tired, old "rising above partisanship" meme, because they have plenty of examples of Republican extremists drawing public paychecks, but for Democratic extremists, they’re forced to cite anonymous callers to talk radio or incredibly obscure academics. That’s "balance" for you.

Let’s visit a couple of examples. The top Democrat in the U.S. Senate, Sen. Harry Reid (D-NV), is pro-life. What are the odds that the GOP would select a pro-choice senator as either their #1 or even #2 leader?

Now imagine Barry Goldwater running today as a first-time candidate. He’s pro-choice, says that gays should serve in the military, and insults the religious right. In a contested GOP primary, does he finish third, or fourth?

Compare the state budget agreed to by the GOP legislative leadership with the governor’s initial budget plan. When Gov. Napolitano issued her budget in January, lots of people could argue with her assumptions or priorities, but nobody could claim that it wasn’t a serious, comprehensive document. You could disagree on the merits of her policy decisions, but you couldn’t complain that the governor had submitted a content-free political ruse.

Not so with the legislature’s budget plan. Both neutral observers and Republican legislators have called the leadership’s plan simply a political tool, "gotcha politics" trying to make the governor look bad. The GOP leadership’s prime goal is making life more difficult for the governor -- instead of better for their constituents.

House Speaker Jim Weiers committed that he’d make public support of science initiatives a top legislative priority. But in the GOP budget plan, the promise got low-balled -- probably in hopes of putting the squeeze on Gov. Napolitano. The leadership might want to force the governor to ask, for money to be matched by private contributions dollar-for-dollar, money that Weiers himself promised, so that the legislature can claim to have compromised.

But the larger lesson is that anyone who believed Weiers in the first place blew it. When he called Science Foundation Arizona a top priority, you should have realized that he really meant "after trying to play political games first."

ISSUES OF THE DAY?

The basic problem is the GOP leadership insists that any budget pass with only Republican votes. This interesting concept doesn’t appear in the Arizona constitution, but it’s a more fundamental tenet of GOP governance than, say, the Bill of Rights.

So it’s the Republicans imposing a political litmus test, and refusing to allow Democratic legislators any say whatsoever. This isn’t any sort of "both parties" playing politics; the only people playing politics here are the GOP legislative leadership, which decided to freeze out not just Democrats, but most rank-and-file Republicans as well.

What, that’s a surprise? Do you really think that the most pressing issues facing America really are gay marriage, flag burning, and the estate tax? Somebody’s serving up this offal, and it ain’t the Democrats.
Posted by Sam at 2:35 PM
Email ThisBlogThis!Share to TwitterShare to FacebookShare to Pinterest